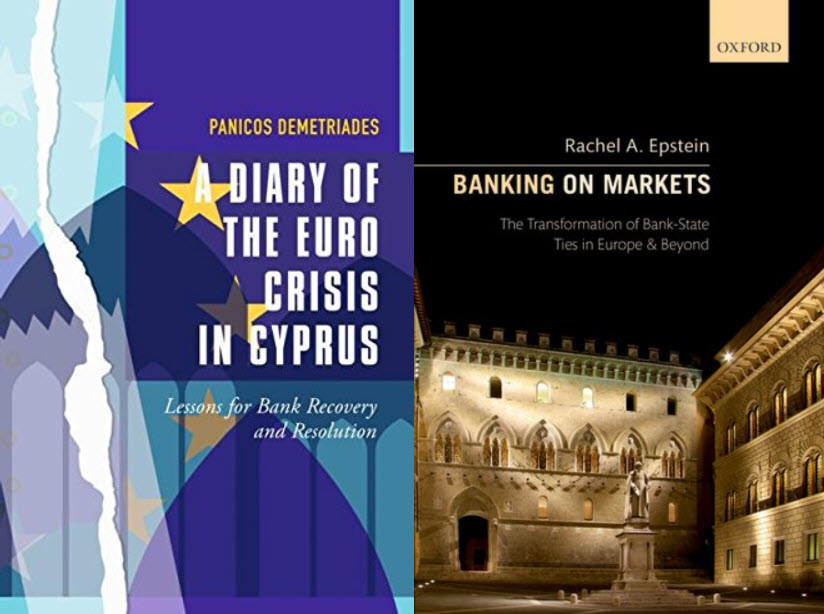 The turmoil that struck Italian sovereign debt and bank equity markets on Tuesday, 29 June, is a stark reminder that the potential for another crisis is real, even if not imminent.  Important parts of the firewall that separates banks from sovereigns remain incomplete – and central bankers remain vulnerable to political influence as a consequence.  Two recent books help illustrate why.  One, by former Cypriot Central Bank Governor and Leicester University Professor Panicos Demetriades, reveals the limits of central bank independence.  The other, by University of Denver Professor Rachel Epstein, explores the interaction between banks and markets.

These are the insights that emerge from Panicos Demetriades’ diary as central bank governor of Cyprus during the 2013 Cypriot banking crisis. His book is essential reading for anyone who wants to understand the politics that surrounds so-called ‘politically independent’ central banks. It is also a cautionary tale about the unintended consequences of participating in Europe’s single market. Demetriades is skeptical of both Europe and the euro. Nevertheless, he is quick to recognize that only the smooth functioning of the euro area prevented an already bad situation from getting worse.

Demetriades explains that the ‘business model’ of Cyprus was always flawed. Politicians and bankers colluded to specialize in a particular form of offshore banking that relied on excessive risk taking and regulatory forbearance. It was a confidence game that grew out of the very personal relationships tying together the center-right of the political spectrum and the largest Cypriot banks. The President of Cyprus, Nicos Anastasiades, felt personal responsibility for the Bank of Cyprus; the Finance Minister, Michael Sarris, was the former head of Laiki; and one of Demetriades predecessors as governor of the Central Bank of Cyprus (CBC), Afxentis Afxentiou, who governed the CBC for two decades, had millions of euros — both his own and his family’s — at risk.

It is no surprise, therefore, that many top politicians and business leaders in Cyprus took it personally when the CBC had to wind up Laiki and restructure the Bank of Cyprus, which were the country’s two largest banks. In response, Anastasiades blamed Demetriades personally and publicly. The government dismissed the deputy governor of the CBC and rewrote the rules regarding board membership and responsibilities. Meanwhile, Demetriades and his family received credible death threats. Ultimately, Demetriades recognized that he could no longer run the bank effectively. When he resigned, it was clear that Anastasiades ‘got what he wanted’ (p. 177).

As Demetriades tells it, the European Union played only a supporting role in this drama. EU membership enhanced the ability of Cypriot banks to attract deposits. Participation in the single currency ensured those banks remained liquid even as they grew far beyond the underlying Cypriot economy. Once the crisis struck, the EU played a more ambivalent role. The ECB was supportive, but only within limits. The Eurogroup was determined to try out a new formula for banking resolution despite the fact — and probably because — this would help to break the Cypriot business model. The damage to Demetriades as a central banker and the CBC as a central bank was collateral to this objective. Demetriades makes it clear that European institutions could have done more to protect his and his institution’s political independence but did not. That neglect is another political vulnerability to add to the list.

Finance and the State Restructured

The close relationship between governments and banks is as old as it is strong. In that sense, there is little that is surprising in the story that Cypriot Central Bank governor Panicos Demetriades tells in his narrative of the financial crisis (see previous review). Governments rely on banks to create money, finance debt, and service the national economy. That reliance is particularly strong when the country faces economic crisis. That is when governments may have to call upon banks for vital support. In exchange, governments are willing to protect banks from foreign competitors and domestic regulators. Policymakers may opt to liberalize capital markets to take advantage of access to savings abroad, but they do not want to lose the control and influence that banks hold in promise.

This state-bank symbiosis is what Rachel Epstein explores in her fascinating study of how the recent economic and financial crisis unfolded in the countries of Central and Eastern Europe. Epstein notes that governments like to protect their banks because having control over (or access to) cooperative national financial institutions makes policymakers feel less vulnerable. Somewhat paradoxically, however, such economic nationalism puts policymakers more at risk – particularly when the domestic economy depends heavily on access to capital from abroad. Those governments that allowed large foreign banks to take controlling positions in their domestic markets, by contrast, turned about to be less vulnerable to capital flight than conventional wisdom would suggest. Rather than fleeing, these large foreign banks chose to hunker down and absorb their losses. Moreover, they did so out of strategic self-interest; having fought hard to gain access to new and potentially lucrative markets, the large multinational banks were more concerned to maintain a presence than to repatriate their assets.

Epstein’s story about the experience of Central and East European countries does not throw away the conventional wisdom about states and banks altogether. Governments that allow foreign financial conglomerates to dominate their domestic markets do not get either the developmental outcomes in normal times or the cooperation in times of crisis that domestic banks could offer. In essence, governments have to trade off policy discretion for a more stable financial funding model. Not all governments are willing to accept that bargain. Indeed, the transition from communism to capitalism may have offered a unique environment for policymakers to reconsider state-bank relations in ways that more vested interests would find abhorrent. The story of Cyprus looms large in the background of Epstein’s analysis even if it is not a case she chose to analyze; the parallel case of Slovenia gets more attention (and leads to a similar disastrous outcome as the government tries to hold onto its domestic banks).

Nevertheless, there are signs elsewhere in Europe that bank-state ties are in a process of transformation. The creation of a European Banking Union with a single supervisory mechanism, regulatory rulebook, and resolution board goes a long way in constraining the instruments of national control. A pooled mechanism for deposit insurance, resolution funding, and direct bank recapitalization could liberate European banks even further from the tutelage of national politicians. It is still too early to tell whether West European governments will find themselves as estranged from their home-grown financial institutions as the governments of Central and Eastern Europe. What is obvious is that the old relationship between states and banks deserves careful reconsideration. Epstein’s book is a critical first step in that process.

These reviews were originally published in the IISS journal Survival.  You can access the review section of the latest issue here.

A Diary of the Euro Crisis in Cyprus: Lessons for Bank Recovery and Resolution. By Panicos Demetriades. London: Palgrave Macmillan, 2017. Xviii + 215 pp.

Banking on Markets: The Transformation of Bank-State Ties in Europe & Beyond. By Rachel A. Epstein. Oxford: Oxford University Press, 2017. Xvi + 214 pp.