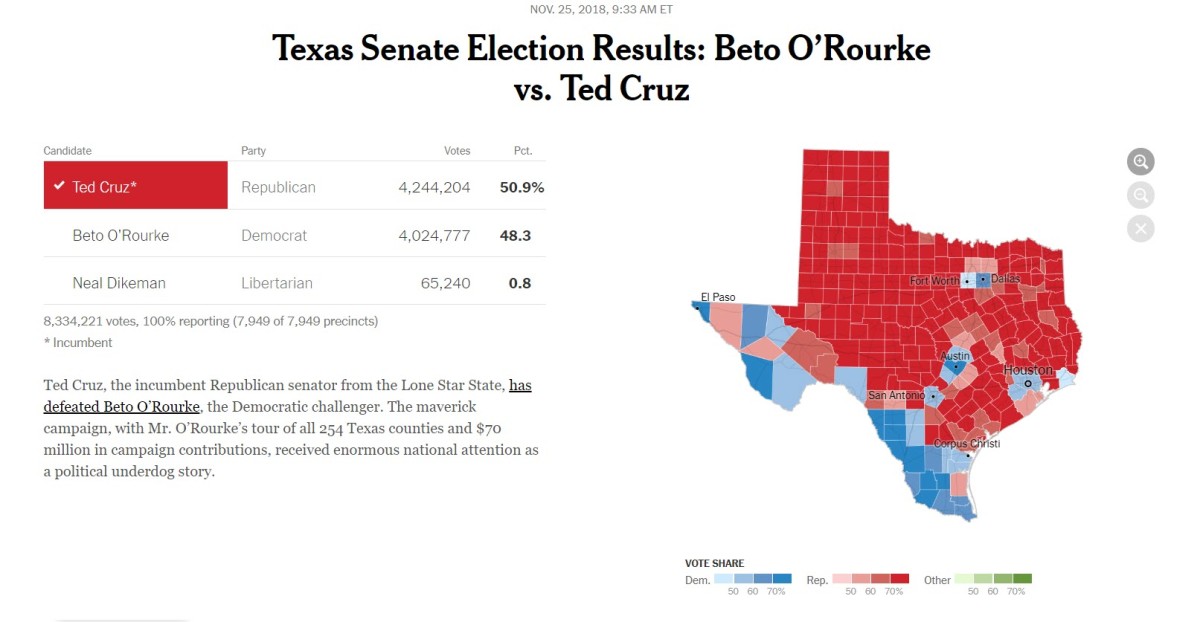 On Tuesday, 6 November, Americans went to the polls to elect members of the House of Representatives, one-third of the membership of the Senate, a handful of state governors, a host of politicians at the state and local level, and a series of ballot propositions concerning local rules and finances (like bond issues for school maintenance) across the country. These elections are called mid-term because they are held midway through the four-year term of office of the sitting national president.

The name ‘midterm’ is misleading, however, because it makes these elections sound like a national contest. They are not. Although the election results will have a strong impact on the performance of the national government, the mid-term elections are primarily local contests. Moreover, despite and perhaps even because of the very prominent role played by President Donald Trump in the campaign, these mid-term elections were even more local than most.

You can tell that these were local elections because so many ballots were wasted. Very few candidates ran a close race from one district to the next; instead those candidates won lopsided victories depending on where you do the counting. Democrats won overwhelmingly in urban areas; Republicans won in rural contests. The boundary space between urban and rural was more competitive, but only under the right demographic conditions. Moreover, this division was important in any contest that spanned multiple local jurisdictions; the Democrats could win control over the House of Representatives, but the Republicans increased their control over the Senate.

Consider the state-wide Senate race between Ted Cruz and Beto O’Rourke in Texas. Pundits outside Texas characterized this race as a bell-weather for a new, inclusive politics. Observers inside the state focused more narrowly on demographics and postal codes. Cruz won that contest by fewer than 220,000 votes out of more than 8 million votes cast. But Cruz trailed O’Rourke by almost the same amount in three of the five counties that play host to major metropolitan areas — Harris (Houston) by 200,000 votes, Dallas by 230,000, and Travis (Austin) by 240,000 votes. O’Rourke also led in Bexar (San Antonio) by more than 100,000 and in Tarrant (Fort Worth) by roughly 4,000. These are the places where most Texans live. Meanwhile, the major suburbs of Dallas and Houston split across the two candidates, with Cruz doing better in the Dallas suburbs by roughly as much as O’Rourke outperformed in the Houston suburbs.

Cruz only beat O’Rourke on a state-wide level because he was able to rack up a string of hugely lopsided victories in counties with small populations. In some places, like Montague county up on the Texas-Oklahoma border, Cruz won virtually every vote, beating O’Rourke by a margin of 6.5:1. This level of detail is important to consider because the same urban-rural divide can be found across the country. Moreover, what it suggests is not that any of these electoral contests was ‘close’ in the sense voters could have easily gone one way or another, but rather that the country is split and polarized.

These divisions are structural. Their roots extend deep into the fabric of local society. According to CNN exit polls done on the votes for the House of Representatives – which means on the votes taken from electoral districts across the country – 60 percent of white men voted for candidates from the Republican party. That number rises to 66 percent if the category is restricted to white men without a college education. Looked at a different way, 61 percent of households that own a gun voted Republican, so did 61 percent of households that worship as Protestants in the Christian faith (or 75 percent who describe themselves as evangelical or ‘born again’ Christians), and so did 52 percent living in households with an annual average income greater than $100,000. In other words, white, male, evangelical, gun-owning voters who manage to earn a decent income without having completed a college education sit at one of the spectrum. These are the old pillars of the local community in rural areas.

The other end of the spectrum is forked, with younger, more secular, more highly educated, and more mobile voters in an alliance with non-white citizens who hope to escape from older social structures and who dream of greater upward mobility for their children. The percentages here are just as striking as the numbers for Republican supporters. 63 percent of households with an annual income lower than $30,000 voted for a Democrat in the House elections, as did 59 percent of college graduates and 65 percent of voters with an advanced educational degree. These groups are urban by necessity. Cities are where the young and highly-educated congregate and where others look for opportunity.

Of course, this urban rural divide was always present to a greater or lesser extent. The difference now is the degree of self-segregation within the electorate and the success of gentrification. Go back to the early 1990s and there was a greater mix of populations in smaller communities, in no small measure due to the un-attractiveness of urban spaces. The success of law-and-order campaigns in America’s great cities together with greater investment in infrastructure and quality of life has altered the balance of incentives. The growing importance of two-income households has also had an impact, particularly among the well-educated; it is easier to find complementary career tracks in more urban environments (and harder for stay-at-home spouses to socialize when the first question they face is about the job they do not have).

Another way to think about the polarization of America is through the lens of status anxiety or status envy. Rural white men do not want to lose their roles as pillars of the community; rural white women do not want to lose the respectability associated with running a home and raising a family; the highly educated believe they should be embraced as a new elite already; and excluded minorities reject a society where they have no chance to be accepted in a position of respect. These positions are hard to reconcile insofar as one side must concede status for any other to gain satisfaction. The different groups can learn to live together only through mutual accommodation.

What the midterm campaign revealed is that the political leadership of both of American’s main political parties believe that accommodation is a form of weakness. Trump is the worst offender with his no-holds-barred rhetoric, his mendacity, his mockery, and his appeals to violent conflict. Given the local nature of the midterms, however, it would be a mistake to characterize Trump as an outlier in the political conversation. On the contrary, many Republican candidates picked up on the cues that Trump had to offer and doubled-down on his divisive message. Of those voters who viewed immigration as the most important issue facing the country, three out of four cast ballots for a Republican candidate; of those who believe the most important issue is health care, three out of four voted for a Democrat.

For their part, the Democrats resisted the temptation to follow a similar path. In some cases, like O’Rourke’s campaign, it is possible to imagine that the Democratic candidates really advocate a more inclusive, accommodating political culture. O’Rourke took a great risk that his message would fall flat; instead it inspired a movement that many in Texas hope he can repeat when the other Senate seat comes into play in 2020.

In other cases, the lack of direct confrontation by the Democrats should be read as a tactic for avoiding hostages to fortune. When a candidate knows they will win, they can afford to use their access to the bully pulpit to push the Democrat’s central policy message about ensuring affordable access to health care services. That message became the central issue in the campaign despite Trump’s efforts to hijack the conversation – leading analysts to praise the Democratic party of its uncharacteristic message discipline. When a candidate runs the risk of losing, however, they are likely to compromise in ways that have less to do with accommodation than with expedience. West Virginia senator Joe Manchin’s vote to confirm Brett Kavanaugh as Supreme Court Justice is a good illustration. Many Democrats criticized Manchin for that vote to support the nomination but none of those critics could explain how Manchin was supposed to retain his Senate seat in a staunchly conservative state like West Virginia if he voted against Kavanagh’s appointment.

The problem for the Democrats is that temptation is only resisted and never defeated. Now that they have won control over the House of Representatives, they have and even larger megaphone for declaring their differences from the Republicans and Republican constituents. The question is whether they will remain self-disciplined. The temptation to lash out at Republicans must be extraordinary. A Democratically-controlled House has broad investigative powers and a House Speaker has unparalleled media access. This gives them the stature to respond to Trump’s many provocations on a like for like basis and perhaps even to dominate the conversation. Moreover, a concerted assault on the Trump administration by a Democratic House of Representatives would play well in urban areas where gun violence is a major concern, among the highly educated who resent the distain Trump shows both for the truth and for intellectual endeavors, and among non-white Americans who can only look with horror at the normalization of white nationalist rhetoric.

Such an assault on the Trump Administration – however warranted – would nevertheless play badly for a rural electorate that feels its own status under attack by the urban coalition, that has already shown a willingness to look the other way when confronted with Trump’s personal and political excesses, and that continues to regard the Republican party as the least bad alternative. It would be easy for Trump to characterize the House Democrats as obstructionist and vindictive; indeed, he started doing so well before the mid-term elections. If anything, he is goading the Democrats to overreach their political position.

Democrats should resist the urge to play to their base and to disregard rural Republican voters. O’Rourke may capture a seat in the Senate in 2020 but that formula for success would not translate to the presidency. A Presidential contest is not like a Senate race in the midterm elections. The President is elected not by the people but by the electoral college, which is itself the product of a series of local elections. That institution gives rural communities – and, more important, rural states – a distinct political advantage. That is how Trump became president without having a popular majority. His best hope to hold onto that office is to rely on a similar imbalance. An aggressive Democratic House of Representatives would only play into that strategy. The lesson from these midterm elections is that the Democrats will find it hard to win contests that stretch across local constituencies so long as America remains a house divided.

This piece was originally published in Italian by Il Regno. For the published version, go here.  The cover image is a screen grab of the New York Times election results for Texas.