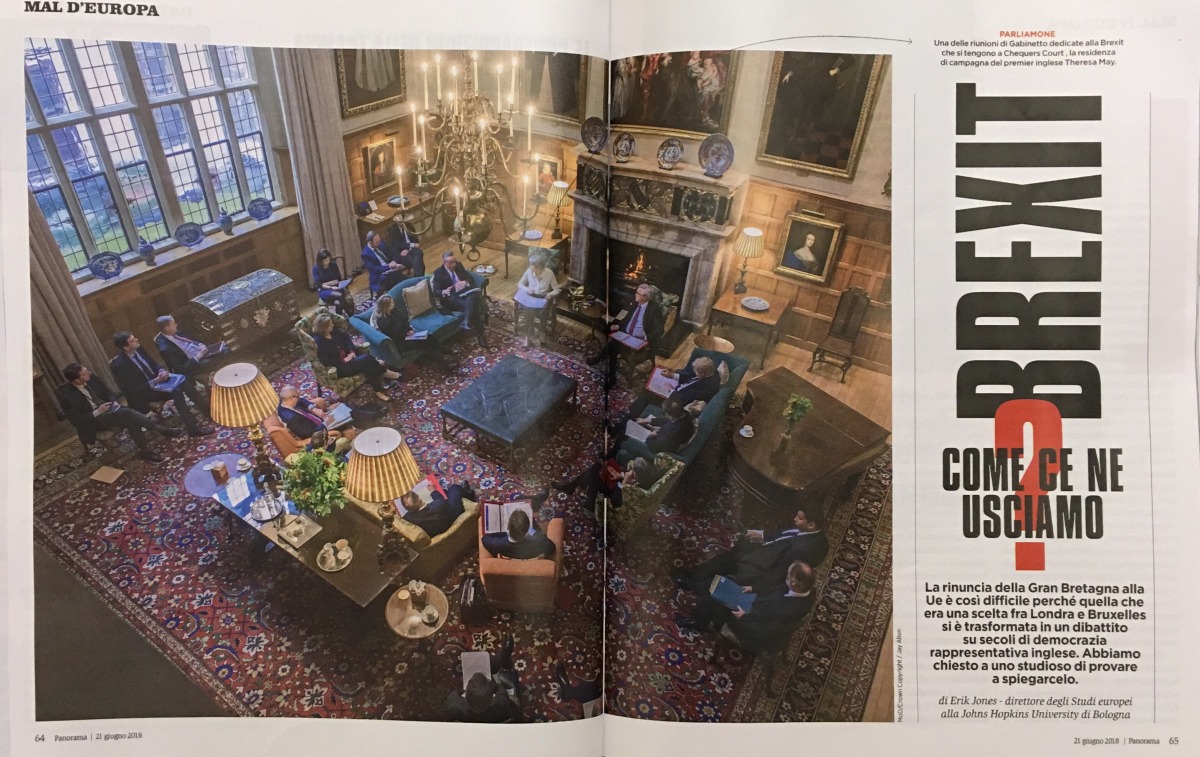 The British government faced another crisis in the House of Commons this week over Brexit, having found a way to stave off the crisis it faced the week before. Both the country and its political parties appear deeply divided over whether the remain in the European Union or to leave. As we know from the June 2016 referendum, the ‘leave’ voters have a narrow majority. The ‘remain’ voters lost. And while the facts on the ground appear to point inexorably toward a British exit, the choice is still far from settled. The reason for this indecisiveness is fundamental. As the British have learned over the two years, Brexit is about more than just their relations with Europe. It is about who makes decisions in a liberal democracy.

With each step in the process of leaving the European Union, the British add a new layer of complexity to that simple question. Start with the referendum. That was a decision of the people. In Britain, however, it is parliament that is sovereign. The people only got their referendum because parliament authorized it as a matter of consultation. That is why the referendum campaigned revolved around ‘taking back control’ from the European Union. The principle was not about the direct democracy of the people versus the representative democracy of the parliament; it was about whether representative democracy (meaning parliament) should be allowed to delegate decision-making authority to European institutions.

When the British people voted to leave the European Union, the members of the British parliament faced a terrible dilemma. They could either respect the will of the people and undo decades of parliamentary legislation, or they could look for some alternative. The period from June 2016 to March 2017 was spent making that decision. A majority in parliament favoured remaining in the European Union. According to British constitutional tradition, however, the government sets the direction for policy. As prime minister, Theresa May used the discipline of her Conservative majority to insist that ‘Brexit means Brexit’. She decided to trigger the formal process of negotiating to leave with the European Union. Then she decided to call for new elections.

The May 2017 elections deprived Theresa May of a Conservative majority. Those same elections resulted in a parliament still divided over whether Britain should leave or remain in the European Union. May was able to cobble together a government with the support of the Democratic Unionist Party from Northern Ireland, but her control over the direction of parliament was weakened. Now the debate is not over whether the British people make decisions; it is also not about whether parliament can delegate to European institutions; instead, it is about whether decisions taken in the Parliament at Westminster are made by government or by the assembled members of parliament.

The balance of power is tenuous. So long as May can appease both her Conservative back benchers and her allies from Northern Ireland, her government has the upper hand. For a while, it appeared likely that a majority in parliament would force the May government to accept an amendment to legislation that would have required her to give them a ‘meaningful vote’ over the results of her negotiations with Europe. If they had succeeded, that would have been be an important shift. The tabloid press was furious. The power to make decisions appears to be slipping from the people who voted in the referendum through an enfeebled government back into the hands of members of parliament.

It remains unclear if there is a majority in parliament that will agree to leave the European Union under just any conditions. The reprieve May won on 20 June when she convinced members of parliament to withdraw the ‘meaningful vote’ amendment is tenuous. They will accept a good agreement, but they will not allow the May government to leave the EU with no agreement at all. That is why this shift in the balance of power between the government and the assembled members of parliament is important. There is a chance – no matter how slim – that the will of the people expressed in the June 2016 referendum might be thwarted and the British Parliament might find some way to stay in the EU rather than crash out with no agreement or with a bad agreement. If that happens, though, it will not be because the people have lost their sovereignty. Sovereignty has always remained with parliament. It will be because members of parliament have usurped much of the power of government to control negotiations about Britain’s relations with Europe.

The situation is further complicated by the fact that, since 1997, Britain has a devolved constitutional arrangement. Within this arrangement, subnational bodies like the Scottish parliament or the assemblies in Wales and Northern Ireland also have decision-making competence. The Parliament at Westminster remains sovereign in negotiating with the European Union. The question is whether these other bodies should receive some of the decision-making power that has been delegated to European institutions if that power is repatriated when and if Britain leaves the EU.

The May government hopes to keep as much of that decision-making authority repatriated from Europe in the hands of the parliament at Westminster as possible. The reason is to avoid having regulatory differences emerge among the subnational authorities in Britain’s devolved constitutional arrangements that could break up the unity of Great Britain’s internal market and hence reinforce the divisions from one part of Great Britain to the next. In other words, Parliament at Westminster does not want the Scottish parliament to do to Great Britain what the British Parliament would like to do within the European Union.

Members of the Scottish National Party are furious about this position. They argue that if the principle is to avoid having representative democracy delegate authority to higher institutions, then it only stands to reason that as much authority as possible should be devolved to the level of democracy that is most representative. The Scottish people voted overwhelmingly to stay in the European Union. On one level, that means they are comfortable with the delegation of decision-making authority to European institutions; on another level, it means that the Scots view the decision to leave the European Union as highly unrepresentative. They would prefer rules that preserve their access to European markets and they would also prefer greater Scottish autonomy. Hence it is likely that the British still have to face a choice about future relations between the Parliament at Westminster and the Scottish Parliament.

The British face a similar choice in relation to Northern Ireland. If anything, the problem there is even more intractable because it reveals the tension between national identity and democratic politics. The Irish are one nation that lives in two different democratic systems, one in the south of the country and one in the north. The people who live in Northern Ireland are British as well as Irish. They are also Catholic and Protestant. But the cleavages do not overlap. Instead the Irish and British identities are blended together while the religious identities are distinctive. The fact that many Protestants prefer to live under British political institutions does not deny that they are also Irish.

The struggle to bring peace to Northern Ireland hinged on finding a constitutional arrangement that promoted national unity while allowing for political difference. The fact that Britain and Ireland belonged to the same European Union made that easier because both parts of Ireland effectively delegated decision-making authority to the same European institutions. If that decision-making authority is repatriated by Great Britain when it leaves the European Union, however, then the delicate balance in Northern Ireland will come into jeopardy. Any decisions taken by the British parliament that create important differences between Great Britain and the rest of Europe will also create important differences between Northern Ireland and the rest of Ireland. This matters particularly for economic regulations related to the movement of goods and services, because it means that British authorities will have to place controls around Northern Ireland.

Although the Brexit debate may have started as a question about relations between Great Britain and the European Union, it has quickly evolved into a debate about the constitution of Great Britain as a representative democracy. If Brexit is hard, it is because the questions facing the British people are so fundamental.

This piece was originally published in Italian in the 21 June 2018 Panorama magazine, pp. 64-67. In this English-language version, I have updated the text to take into account the events of Wednesday, 20 June.