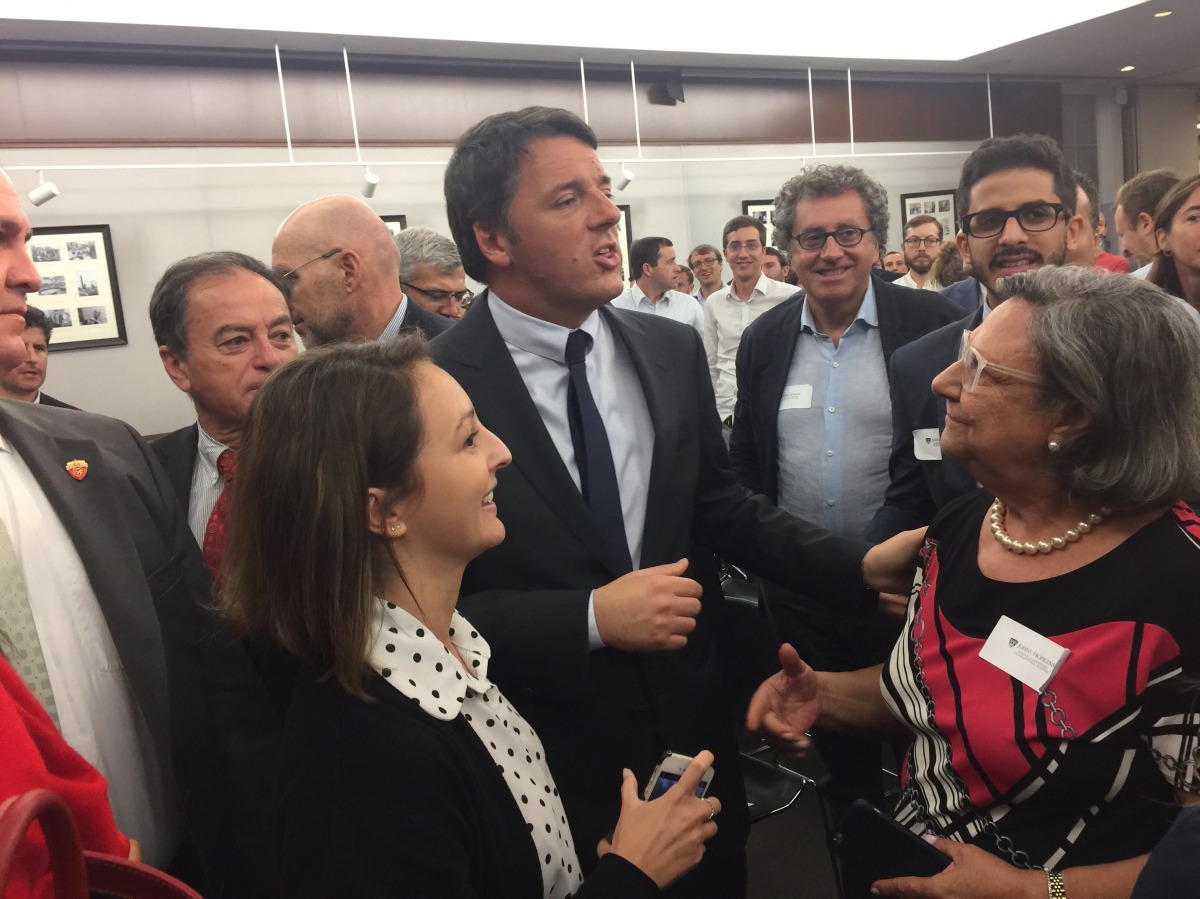 The meme that is circulated about the referendum in Italy is that Prime Minister Matteo Renzi gambled heavily and lost. Having staked his political future on the success of a controversial constitutional reform package, Renzi has now placed both the country’s financial system and the euro area as a whole in jeopardy. As with most memes, there is some truth hidden in this assertion. There is also much that is misleading. The complicated reality is that Renzi must have recognized that it would be hard to win the referendum. He also must have realized that he had little choice but to try.

The constraints on Renzi’s room for maneuver are the best place to start. When Renzi assumed the premiership in February 2014, he did not invent the constitutional reform process; he inherited it. The broad outline had been worked out already in April 2013 by a committee of wise people convened by President of the Republic Giorgio Napolitano in response to the inconclusive national elections that took place in February of the same year. That committee recommended that the constitution be reformed to reduce the powers of the Senate so that any new government would require only the confidence of the Chamber of Deputies. It then went on to explain how the electoral law for this newly strengthened Chamber of Deputies should operate on a two-tiered system to ensure that it has a working majority. And it suggested that the reforms could be validated by a popular referendum in accordance with Article 138 of the existing Constitution. In other words, virtually everything that Renzi brought forward was crafted long before he rose to become Secretary General of the Democratic Party in December 2013 or Prime Minister three months later.

For his part, President Napolitano was not fully in control over events either. Instead he was responding to the sudden surge in support for Beppe Grillo’s Five Star Movement in the February 2013 national elections and the huge difficulties that the Democratic Party had subsequently faced to form a working coalition in the Senate. Napolitano also anticipated the burden that the Democratic Party leadership would have putting forward a candidate for his own replacement when his term as President of the Republic expired. In the end, Napolitano agreed to stay on another two years in office. The price he required for this extension of service was a commitment that the next government would give priority to constitutional reform. Renzi inherited that as well.

The challenge for Renzi was to live up to the commitment. He did so by forming a pact with Silvio Berlusconi and by binding elements of Berlusconi’s party to his own Democratic Party in order to establish a Senate majority. It was complex political operation that alienated important elements on the left of the Democratic Party. Nevertheless, it created sufficient space for the Renzi government to divide its time between constitutional reform and a major effort to overhaul the labor market (called the ‘Jobs Act’) in order to shift workers from precarious to full-time employment. The constitutional reform process was relatively slow to mature. Although Renzi was able to pass a new electoral law for the Chamber of Deputies by May 2015, he was unable to get the constitutional reform package through the necessary votes in both chambers of parliament until the following April. Moreover, significant elements – like how members of the new Senate would be appointed – remained unresolved. Nevertheless, the progress was sufficient to schedule a confirmatory referendum. The only problem was to identify an appropriate date.

The first polls that were produced after the reforms showed a very mixed picture for the government. Some of the polls suggested there would be support for the reforms; some showed opposition; all suggested that many Italians were undecided. By this time, however, Renzi was already locked into the procedures set out in Article 138 of the Constitution for ratifying a constitutional reform that does not secure two-thirds of the vote in both chambers – which is what Napolitano’s committee of wise people originally anticipated. Hence it fell to the Renzi government to make the case for reform to a skeptical and largely undecided public.

Selling the constitutional reform was always going to be a difficult process. The reason is baked into the Constitution. The original document was created to bridge the deep divisions inherited by the First Republic from the experience of the Second World War. Hence it is a document that privileges representation over decisiveness and creates many significant veto points to prevent the domination of the state by a single individual or party. Fast forward to the early 21st century and those representative elements of the Constitution make it hard for any government to function. There is nothing unique about this situation. As Francis Fukuyama has been quick to point out, the United States Constitution creates many of the same challenges. Instead of a democracy, Fukuyama argues, the United States operates as a ‘vetocracy’ as a consequence. Nevertheless, it would be a mistake to assume that the Italians resent the representative character of their Constitutional arrangement. On the contrary, public opinion polls show that the country is deeply divided over the relative merits of representative government versus divisive government. The vast majority believe that any trade-off should be made on a case-by-case basis rather than through any significant changes in constitutional arrangements. In other words, they would like to have their representation and meaningful reform at the same time.

It did not take long for the Renzi team to realize the difficulty of their situation. That recognition gave them little insight, however, into how the problem could be resolved. Worse, the Renzi team faced two distinct disadvantages. The first is that the minister for reforming the constitution, Maria Elena Boschi, was implicated in a controversial banking resolution scandal. She was never charged with specific wrong-doing, but the taint was enough to damage her credibility as a spokesperson for the government in the referendum campaign. The second was that the same pressure for more sweeping changes that animated support for Beppe Grillo’s Five Star Movement (and so stimulated the whole constitutional reform debate in the first place) had never dissipated. If anything, it only became more intense – particularly among the country’s youth. In the June 2016 administrative elections, the Five Star Movement swept to power in both Rome and Turin. During the course of the summer that followed, a string of public opinion polls showed that the Five Star Movement could even defeat Renzi’s Democratic Party in a head-to-head showdown at the national level.

Renzi’s response to this information was to delay the date of the referendum as long as legally possible. The idea was to give himself as much time to campaign as he could. The hope was also that some improvement in economic performance would lift the popular mood. In the end, neither the time nor the economy made much of a difference. If anything, the continuing threat of a financial scandal and the incessant pace of migration into the country only darkened the popular mood. These issues did not cause the electorate to turn against the constitutional reform proposals but they did heighten uncertainty enough to push undecided voters to embrace the status quo rather than add constitutional reforms to the list of uncertainties. Exit polling by the Trieste-based research firm SWG shows the extent to which opposition is concentrated in those parts of society most at risk – the young, the less well-off, and the unemployed. Renzi and his team managed to carry 40 percent of the electorate and 83 percent of his own Democratic Party, but that was nowhere near enough to live up to the commitment he inherited from Napolitano.

Renzi’s challenge now is to build on the support he has within the Democratic Party in order to reach out to those parts of society that rejected his constitutional reform program. To do that, he will need time away from the obligations of government. Once he has completed the current law on government finances, he is going to step down as Prime Minster to focus on his role as Secretary General of the party. Along the way, he will have to reconnect with elements to his left while at the same time confronting the Five Star Movement. He will also have to find a way to work with the center right in order to support a technical government long enough to reform the country’s electoral laws. This political agenda leaves a whole range of questions unanswered – about the recapitalization of the country’s banks, the stability of its sovereign debt markets, the handling of migrants, and relations with the European Union. These are all issues that will have profound consequences for the rest of Europe. Until someone can master Italy’s domestic politics, however, it is unclear how they will be resolved. Renzi tried and failed. Now he will just have to try harder.

This piece was originally published by IPPR Juncture. For the edited version, go here.